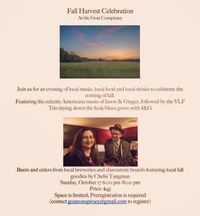 Jason & Ginger at the Goat Conspiracy with the VLF Trio

The Goat Conspiracy, Bloomington, IN

We return to Metamora for a set on the Back Porch Stage! Free!

Born in Kansas, singer-songwriter-guitarist Jason Fickel was bitten by the blues as a teenager. He headed South to Mississippi where he apprenticed himself to blues masters James “Son” Thomas and Othar Turner. Next he went North, first to Rhode Island and then to Chicago, where he honed his songwriting craft. He has been called “Elvis Costello wearing Donovan’s boxers” and his tune “Get Your Car Off My Lawn” was featured this year on NPR’s Car Talk. Jason’s killer slide guitar and wry lyrics create a musical experience whose roots are nourished by the powerful versatility of vocalist Ginger Curry. Born in Kentucky and raised in the rich traditions of Southern Baptist gospel music, her voice communicates the wide range of the human experience from barrelhouse blues to soul-stirring ballads. Beyond gospel and blues, she is an established songwriter in the new thought community and still finds time to express her Kentucky roots singing in a down-home bluegrass combo.

Jason & Ginger released their debut album, “Jokerville,” in 2011 and that same year were semi-finalists at the International Blues Challenge in Memphis, TN.  In 2013 they released their second CD, “A Good Man Is Hard to Find: Celebrating the Women of the Blues”, a recording project that emerged from their Classic Blues program of storytelling and songs.   2016 brought the new album, "Some Kind of Love" featuring four originals and six classic covers.